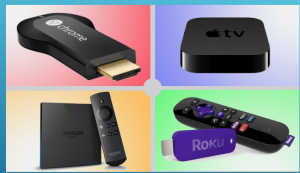 The following are the top 4 competitors in the market place to date. However, they are ALL subscription/rental based, whereas Hydro Entertainment Network is not. This separates us from the field.

Amazon’s Fire TV is ahead of all competitors in terms of processing power, memory storage and the ability to expand to the gaming controller. Where the Fire Stick falls short is the content channels, which are not the same as Roku and Apple TV. Price is $119.99 and the controller is $39 for games

Roku has several current models but the best model is this one. It is comparable to Apple TV with regard to storage and memory. They have more channels to choose from than Apple and Amazon. However, the functionality of this is not user friendly. It retails for $99.99

You might call Apple TV the great uncle to other streaming players out there. The device is irrelevant amongst new competitors. In fact, apple recently announced the company has sold 20 million Apple TV boxes through the year’s second quarter. Apple is selective in its channels. There are HBO Go, Disney, Watch ABC, and A &E. There is not a lot of RAM and memory with this device. It costs $169 and $4.99/mo for Apple TV+

Google’s Chromecast is simple and easy to use. It plugs directly in your HDMI port and wall outlet for power. This device requires you use a mobile device or Chrome on Mac as a remote control which does not make it user friendly or its own separate functionality. The device is $35 and has other subscription charges for premium channels of 100.

Want to know about our offers first?